I just received notice that the Park City Film Series (non-profit organization) is having an ebay charity auction to raise $75,000 to convert their theater to digital cinema projection since that is the standard format for films. They are hoping to accomplish the conversion by the end of the year or else they may not be able to show any new films in the future.

The link for the auction is here: Park City Film Series Auction

It’s kind of confusing when you land on that page, because all you see is the description of the auction and then a prompt for selling items for the auction.

SCROLL DOWN THE PAGE on the auction page to view the items for sale and you will see something like this: 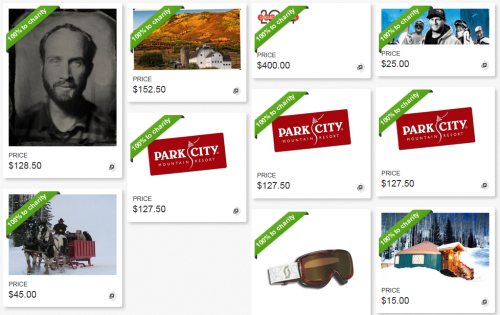 Right now there are listings for 2-day Park City Lift Tickets with no restrictions starting a $63.75 which is a big discount to the normal $107 lift ticket price. There is also a sleigh ride at Deer Valley for 5, lunch at the Viking Yurt, Helicopter ride around Park City, Sundance Film Festival Package, McConkey 3 in 1 DVD  Box Set plus poster signed by Director Rob Bruce and more.  I’m not sure if that is all that will be up for auction or if there will be more items for sale. Looks like the auction will be up for another 7 days. Check it out, grab some deals and in the process help the Park City Film Series.